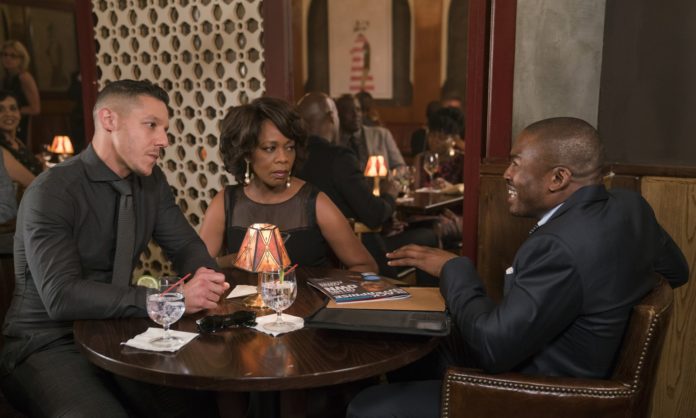 Spoilers ahead for Luke Cage Season 2. Marvel villains may have to face superhuman vigilantes and otherworldly heroes during their quest to take over the world, but they have a lot in common with real-life criminals. The key to running a shady street operation is to launder illegal funds through a seemingly legit business transaction. In Luke Cage Season 2, which premiered on June 22, the newly minted Harlem crime leader Mariah Dillard (Alfre Woodard) invests profits from selling an illegal business in a company to fund her community center. But, what is Atreus Plastics in Luke Cage and why does Mariah choose this business? The fictional company has been popping up all over the Marvel TV universe.

Atreus Plastics was first referenced in the Season 1 finale of Daredevil. Several trucks with the company’s logo were used to help Hell’s Kitchen villain Wilson Fisk escape police custody. It was an Easter egg in reference to the company’s Marvel comic roots (Daredevil #184, 1982) as a high-grade plastic explosive producer, per ComicBookMovie.com. It wasn’t made clear who owns Atreus, but it was at the center of a Daredevil/Punisher showdown.

Luke Cage’s second season brings the company and its leader into the limelight. Atreus Plastics is mentioned in the opening episode as Mariah and Shades (Theo Rossi) receive insider information about Atreus Plastics from financial whiz Raymond “Piranha” Jones (Chaz Lamar Shepard), the owner of Uptown Investments. It’s owned by Mark Higgins (Jeorge Watson) and is the largest Black-owned plastics company in the world.