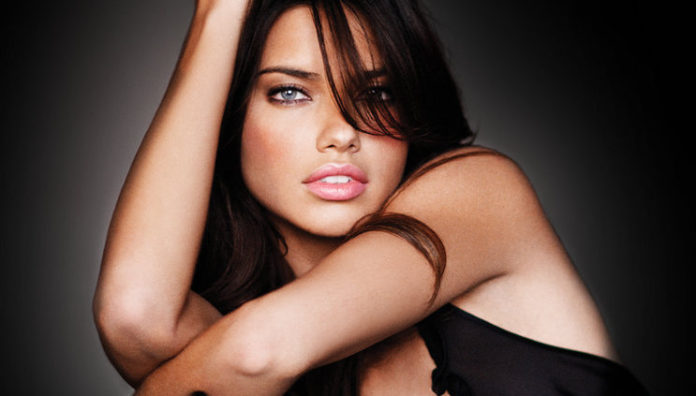 I think we all can agree that models are awesome. They’re attractive, and they never make a big deal about it. They were just made by their creator to look good. They’re fun to look at and put on display. They remind you of a simpler time, when your worries were few. 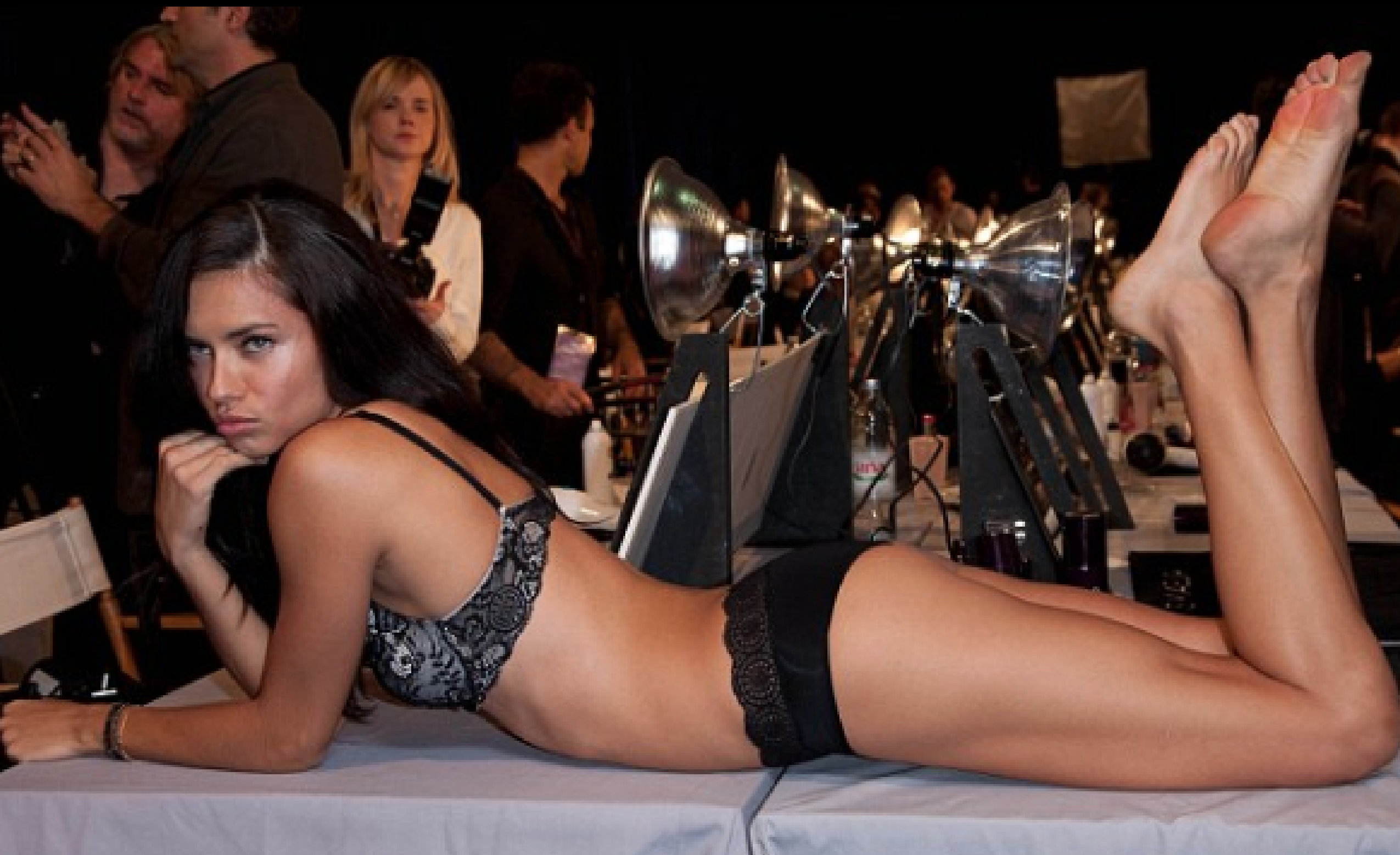 Brazilian model Adriana Lima, just hanging out in the manner most of us would, if we looked like Adriana Lima. Who’s going to tell her to stop?

Sometimes, they’re also worth a lot of money. You know how in sports at the end of a season or a championship game, or whatever, the pundits — whomever they may be — will put their heads together, look at the stats, take into consideration various mitigating circumstances, and determine a Most Valuable Player?

Well, we’ve scoured a number of different sources and determined for you, our faithful and
dedicated readers, the 5 Most Valuable Models of the past 12 months. Some familiar names, and some surprises to be found. Keep on reading. There is some beauty to behold in the following list. 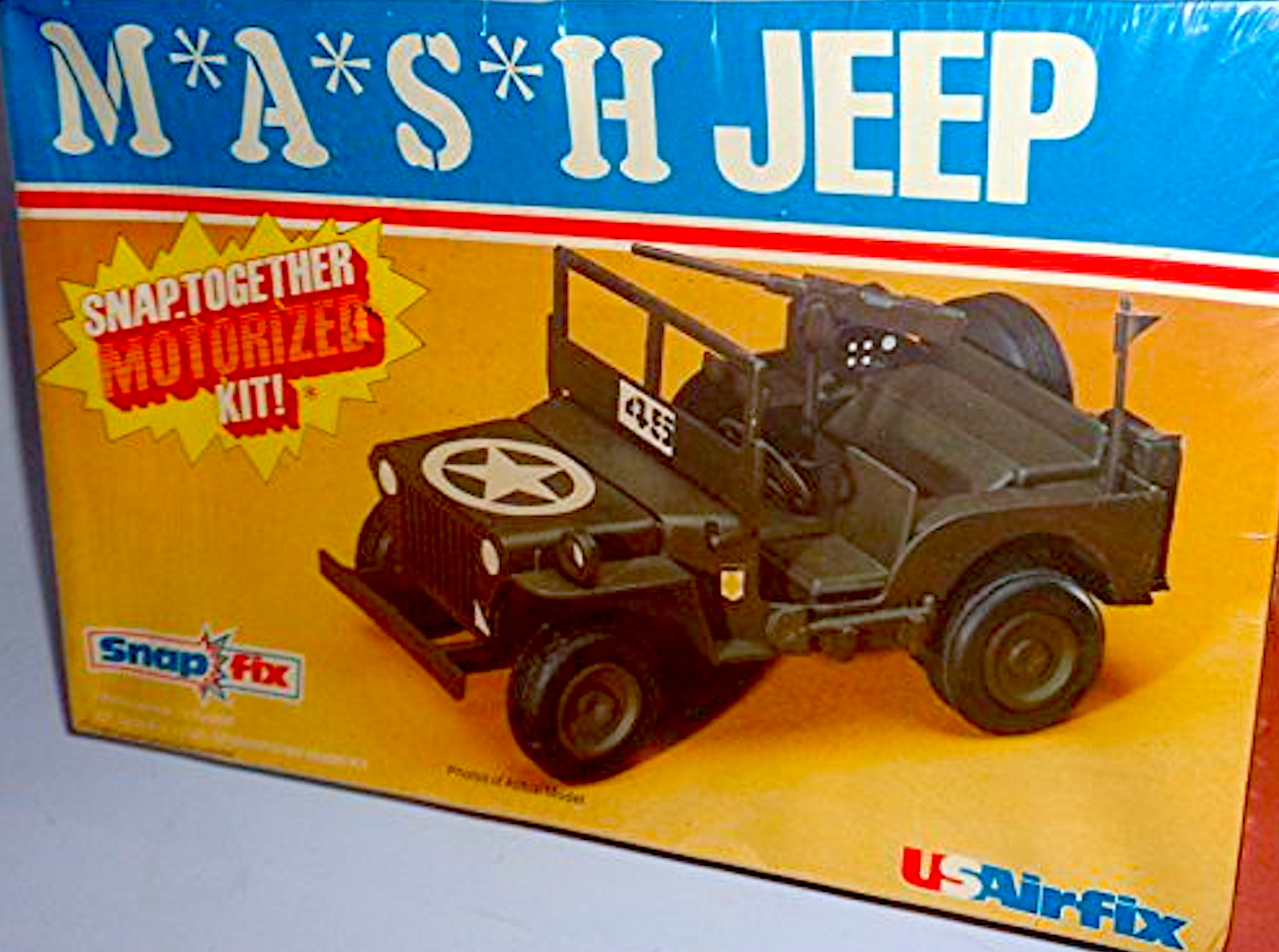 5. M*A*S*H JEEP ( U.S. Airfix , 1979)
This is what you call a beaut! From the former U.S. Airfix (now just Airfix, a name known to all model hobbyists), from their terrific Snapfix line. You may scoff at snap-together models as being made for grandmas and little babies, but we’ll have you know that one of these bad boys — mint in box, and still in shrinkwrap (control your drooling) — recently fetched $39.95 (!), BEFORE shipping, on eBay.

Snap-together models may get a bum rap, but they’re a lot of fun if you don’t want to make a mess. Speaking of mess, should you ever go back in time and visit the Korean conflict, and you wind up at the 4077th , you’re going to want to do a couple of things. First, stay out of the operating room, as the doctors and nurses are busy enough without you getting in the way.

Also, you’re really going to want to stay out of the mess tent, presided over by that clod, Igor. If you think war is hell, just wait’ll you try the food!

No, but seriously, war is not a laughing matter. Should your visit coincide with a time in the
4077th ’s history when B.J. has a mustache, you’ll be certain to learn that truth in no uncertain terms, probably repeatedly. Still, valuable model. Just don’t remind Hawkeye about that chicken. 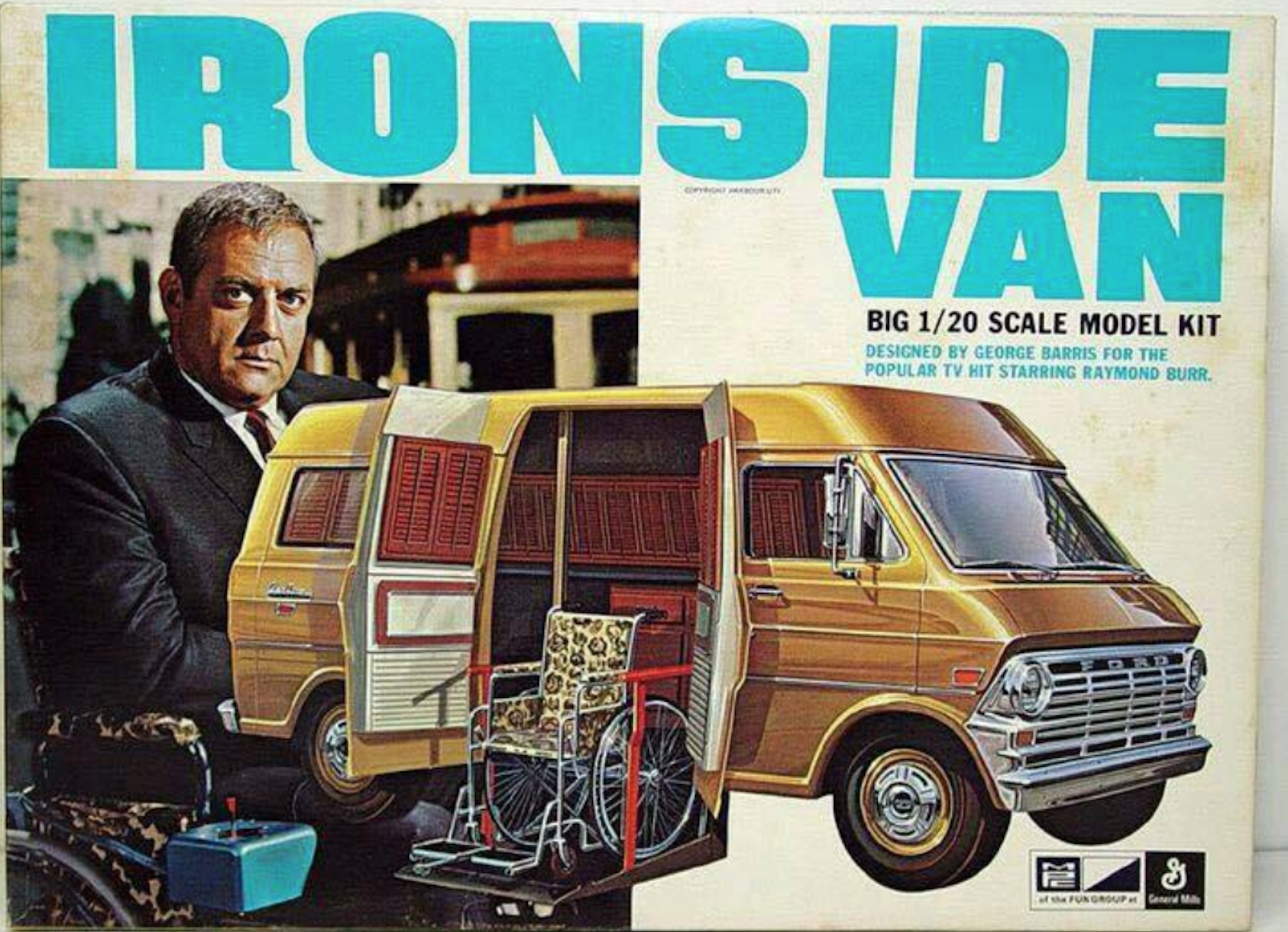 4. Ironside Van ( MPC of the Fun Group at General Mills , 1971)
When it comes to van models, in the ‘70s there was only one name that mattered. That’s right, MPC . Those three letters represented model van excellence. When found next to one other letter, “G,” for General Mills. You knew there’d be NO knockin’, for that van would be rockin’.

For those of us old enough to remember, General Mills didn’t just fortify our mornings with
sugar, they enriched our every waking moment with toys and games, owning Parker Brothers, Kenner, and a whole bunch of toy manufacturers.

In pre- ’Star Wars’ America, every child was obsessed with Raymond Burr and his portrayal as paraplegic, San Francisco police consultant, Robert T. Ironside. Our square parents would go on and on about ‘Perry Mason’ this and ‘Perry Mason’ that, but they didn’t get it. They just couldn’t accept that every generation gets the Raymond Burr it deserves. And we deserved sweet ‘Ironside,’ and his even sweeter van.

Not every generation, as it turned out, was destined to get their own ‘ Ironside,’ however. Blair Underwood nobly rose to the occasion, and tried to be an ‘ Ironside’ the Millennials could call their own. NBC, however, canceled the series after three episodes. The original ran for eight glorious seasons, at least like five of which, maybe six, featured a pretty cool van.

Once the SFPD’s Chief of Detectives, while vacationing a sniper’s bullet forced him into a
wheelchair and early retirement. The men once in his charge, however, still called him Chief Ironside. That’s what we called him out on the playground, too. Out of respect.

Anyway, while we see a guy on eBay right now trying to sell one of these incredible specimens of MPC vancraft, for $348.03, Canadian . It currently has no bids. One did sell, though, in the past six months, in “Box open looks like all there” condition for a whopping $43.60. Valuable. 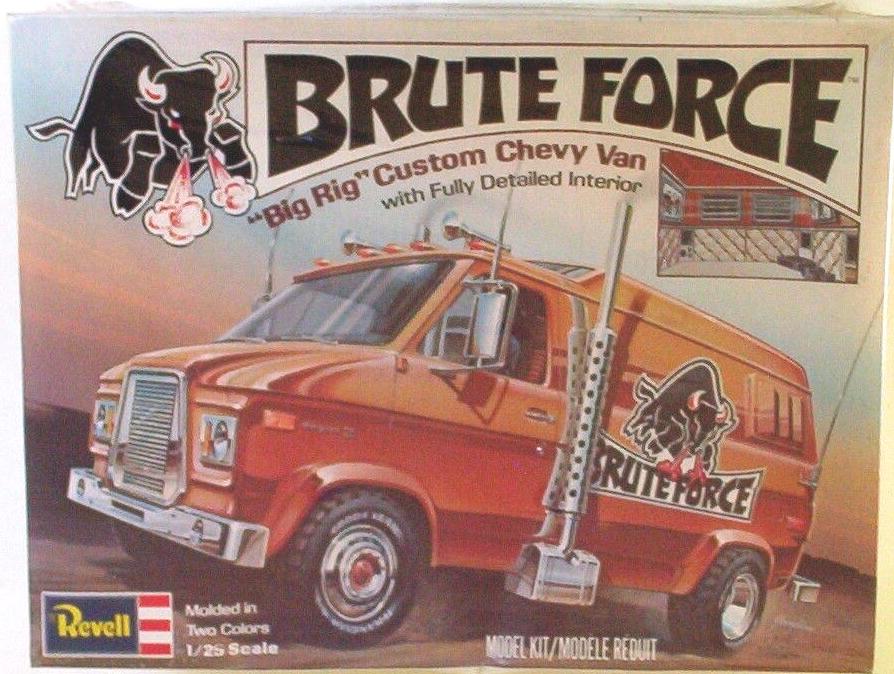 3. Brute Force “Big Rig” Chevy Custom Van ( Revell, 1977)
While MPC may have been the all-around champion when it came to van models, in 1977, just as punk rock was shaking up the established order in popular music, Revell were like the Sex Pistols of van model manufacturers.

You NEVER had the feeling you’d been cheated, though, when you bought one of the
remorseless scaled down “Big Rig” models in Revell ’s appropriately named, ‘Brute Force’ line. If you thought the glue made you woozy, just looking at the cover of the box to one of these monsters was like a fist to the throat.

When you came to, gasping for air, somehow the model was already built perfectly, and you didn’t remember a thing. Your mother wasn’t speaking to you, but she wouldn’t tell you why.

She’d simply say, “You know perfectly well why. Now go back to your room, I told you that you were grounded.”

It was worth it, though, because while you were supposed to be thinking about what you’d done, you were instead staring at that “Big Rig” on your shelf, and thinking “ MPC was cool, for their day, but look at the detailed interior on this thing. I thought I had no future, but now I know Revell is the future.”

Another who thought it was worth it was the lucky individual who recently bought the item
pictured above for an impressive $120 on the nose. That eBay seller — who the buyer
commended for his great communication and fast shipping — treated his wife and kids to Red Lobster that night, we’d bet. 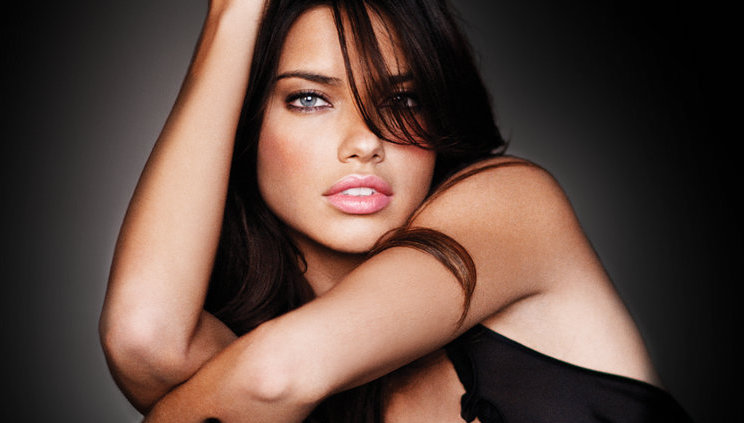 2. Adriana Lima
The companies who employ Ms. Lima surely regard associating their good, service, or brand with her likeness to be a thing that has considerable value. This Brazilian stunner — whose net worth is estimated to be $75 million — made $10.5 million last year alone. Well done, Ms. Lima.

We read on Page Six that she attended the Oscars alone, after possibly calling it quits with
some new age, self-help guru type with whom she’d not long before been involved. We know nothing about that for certain, but those who are interested should make their move NOW, because we bet — looking as well as she generally does — that her dance card fills up quickly. 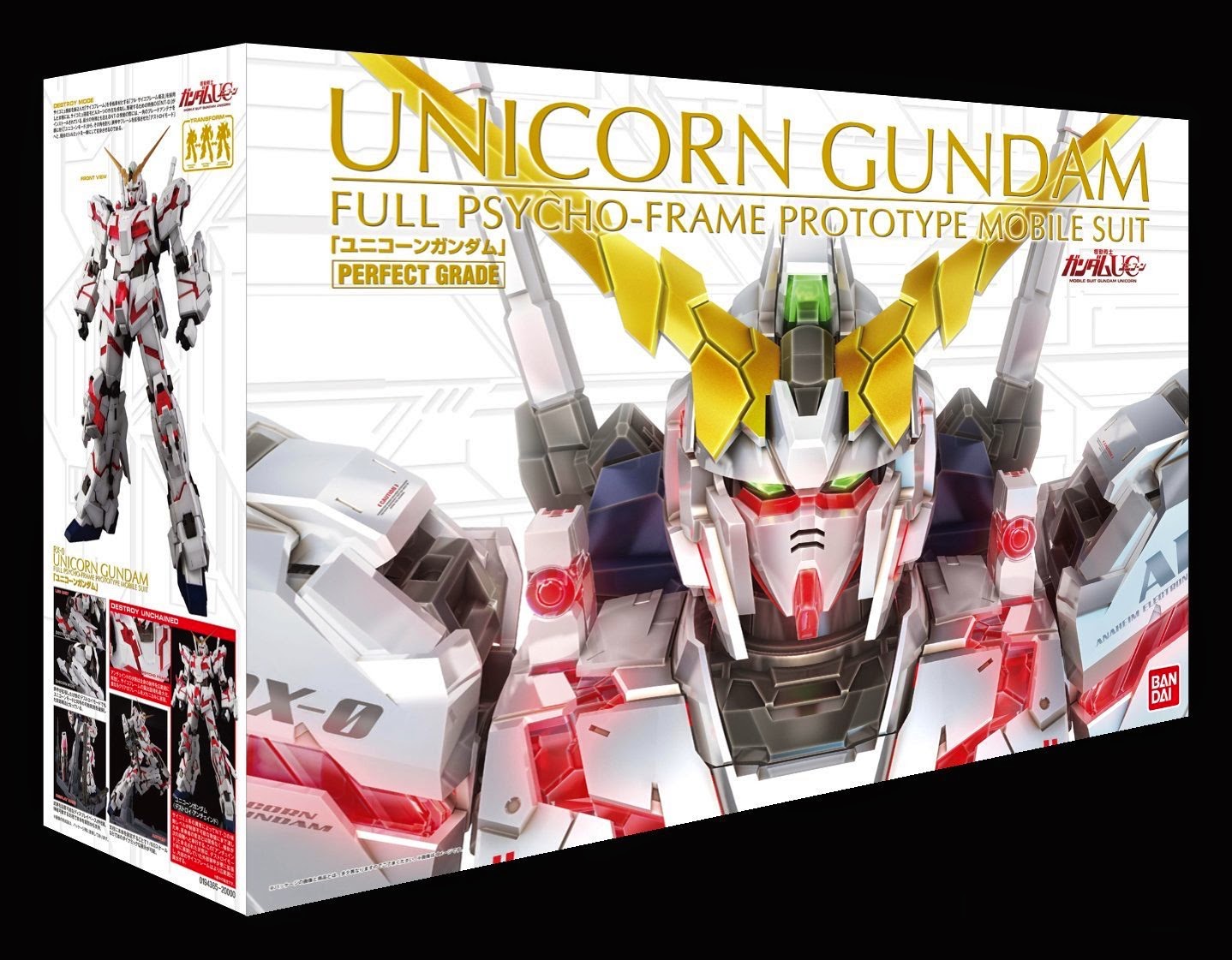 We know. We know. The whole time you were reading this list you were thinking, “It’s going to be a Gundam, number one is ALWAYS a Gundam” (which is not strictly true, in 2016 it was a model locomotive). There is a good reason for why Gundams dominate the top of these lists as they would the whole planet, were they to actually exist.

First, Gundams are immune to any anti- snap-together bias. They are for ages 15 and up. This isn’t kiddie stuff. They also require a hobby knife . Adriana Lima does own one, but she does not REQUIRE one. She doesn’t put “hobby knife” in her rider for a photo shoot, next to the bottled water and hummus.

Gundams can’t be snapped together, no matter your aptitude with snapping, without a hobby knife. So, you pretentious-Petes, looking down your noses at things that go “snap” in the night, while you build your super-detailed and hyper-accurate, fancy-pants World War I flying ace planes, just spare us your judgment. Thanks.

There is no more relaxing a way to spend a Saturday than to get the three ‘90s Gamera movies on DVD, and set about snapping together for yourself a beautiful Gundam , while perhaps a dear friend keeps you company and you discuss the events of the world, as you’ve already seen these Gamera films a whole bunch.

Returning to the matter of value, however, while we’ve observed evidence of this item going for as low as $160, it generally averages between $215 and $230. We see that earlier this year one sold on eBay for $300. That ’s a spicy meatball, and that ’s a valuable model.

Indeed, one might even say, that’s the MOST VALUABLE MODEL!