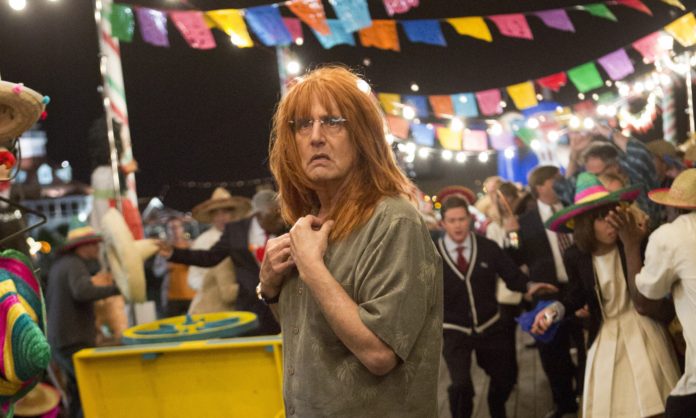 Before he was Maura on Transparent, Jeffrey Tambor was George Sr. on Arrested Development. And while Season 4 of the Netflix series hinted at George possibly transitioning, there is a direct Transparent joke in Arrested Development Season 5. George dressed as a woman in the series last set of new episodes, but that couldn’t have been a reference to the award-winning family drama; the timing doesn’t work out. So it wasn’t necessary to the plot for Arrested to keep these very specific jokes about the actor’s other most famous role in the new season.

Considering Tambor’s alleged behavior on the set of Transparent, Arrested Development fans may be taken aback that the former gets a nod in the very first episode of Season 5. Lieutenant Toddler, a police officer investigating the disappearance of Lucille 2, asks Michael about the red-haired woman her partner had seen at the penthouse the day earlier. As narrator Ron Howard reminds viewers, that was “cismale George Sr.” In Season 4, George Sr. pretended to be a woman after he found out he had very low testosterone levels and very high estrogen levels. Howard then says, “George Sr. soon realized his impression of a woman wasn’t going to win him any awards. So he took off in his trailer for Mexico to forget his shameful mistakes.”

For his role as the transgendered Maura, Tambor won two Emmys and a Golden Globe for Best Actor in a comedy series. And while those accolades may have been something to celebrate before the accusations, the joke now seems insensitive to the two women who accused him of sexual harassment on the set of Transparent; the woman who claimed she experienced an earlier incident of harassment in 2001; and anyone triggered by those accusations. Bustle reached…