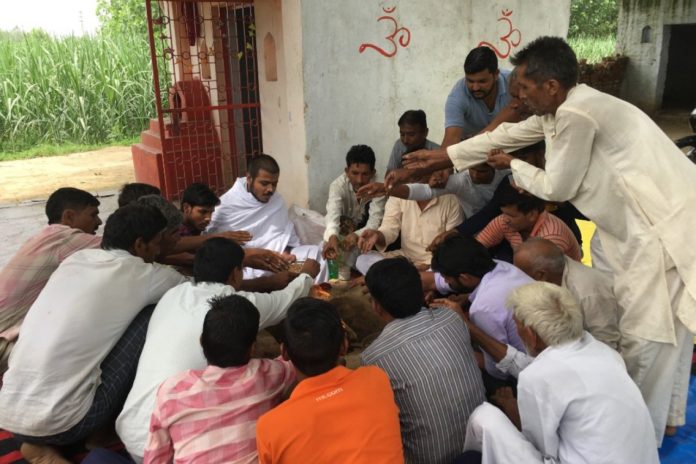 A number of media outlets recently reported an incident from a village in Uttar Pradesh’s Meerut district where a group of Dalits were allegedly denied entry into a temple due to their caste. The next day, the group, along with Dalits from surrounding villages, staged a protest outside the local police station, threatening to leave Hinduism if they are not allowed to enter the temple.

The case was widely cited in the mainstream media and on social media as an example of social discrimination plaguing the Hindu society that is leaving the oppressed “lower castes” no option but to turn to other religions for liberation.

But after the initial media frenzy, there have been no follow-ups, as is often the case.

So we bring you the twist in the tale: days after the alleged incident, the Dalits of the village, along with all caste groups, entered the same temple, did puja (worship) and performed a havan. In a dramatic moment, the youth who led the protests outside the police station, raised slogans for Hindu unity after the rituals.

So how did this come about? Well, here’s the story:

Pachgaon Patti – incidentally just a kilometre away from the now famous Sinauli village where archaeologists have just discovered that a warrior class possibly lived here 5,000 years ago – has a majority population of Rajputs and Thakurs. The Jaatavs and Valmikis – both considered Scheduled Castes (SCs) – together account for 500 votes out of the total 5,000. Nearly 15 per cent of the village population comprise Muslims, as informed by the village pradhan (head) Bhopal Singh, a Rajput.

The temple in question is a one-room samadhi (place of death or salvation) of one ‘andhe baba’ (blind sage) near the village entry. It houses no deity but a stone slab under which devotees light a diya (lamp). The baba, incidentally a Dalit himself, was a devotee of Lord Shiva and so visitors routinely offer liquor and bhaang (a preparation of cannabis), especially in the ongoing month of Shravan. While all caste groups offer prayers here, most visitors are Dalits as the ‘andhe baba’ was a Dalit himself and the samadhi happens to be closest to Jaatav and Valmiki colonies.

According to the villagers, the samadhi did not have a caretaker for months. Two weeks ago, a baba from a nearby village came and began to live in a small room adjacent to the samadhi. In villages, it’s not uncommon for wandering sadhus to make such vacant sites their abode. Initially, no villager bothered. But soon, a tiff started between the baba and a groups of youths – most of them Dalits – after the former started objecting to their habit of sitting outside the temple and drinking (the liquor offerings), villagers told Swarajya.

The baba began to prohibit the entry of Dalits into the temple and began to turn away the offerings of liquor. Bhanvar Singh, a Jaatav, told Swarajya that the baba stopped him from offering prasad, telling him that he was from a lower caste and must go elsewhere. “I was shocked because I have a greater claim on the sacred place than he does. My father Gainda Ram was a disciple of ‘andhe baba’ and was a caretaker of the samadhi till his death,” said Singh.

“I returned home. Who wants to pick a fight after all.”

The tiff took a violent turn on 30 July when the baba and the youths came to blows. The next day, the youths, along with Dalits from nearby villages, staged a protest outside the local Bhawanpur police station demanding action against the baba. The youths gave a letter to the police that the baba turned them away saying they were not Hindus and that action should be taken against him.

But for reasons we will come to later in the copy, the protesters also held placards that read, “Hum Hindu nahi to aur kya hain (“If we are not Hindus, who are we?”) and “Agar hamein nyay nahi mila to hum dharm parivartan karenge (if we don’t get justice, we will convert to other religion”).

The protest was prominently covered by the media given the sensational threat to convert.

When Swarajya visited the village on Saturday (4 August), a totally different picture emerged. Instead of caste…